$3,600,000 million dollar verdict was returned by a Suffolk County jury for a man who lost vision in one of his eyes. ...

Mike Della reaches settlement in the amount of 1,025,000 on behalf of NYC Police officer involved in intersection accident where the stop sign was proven to be knocked down months before causing the a... 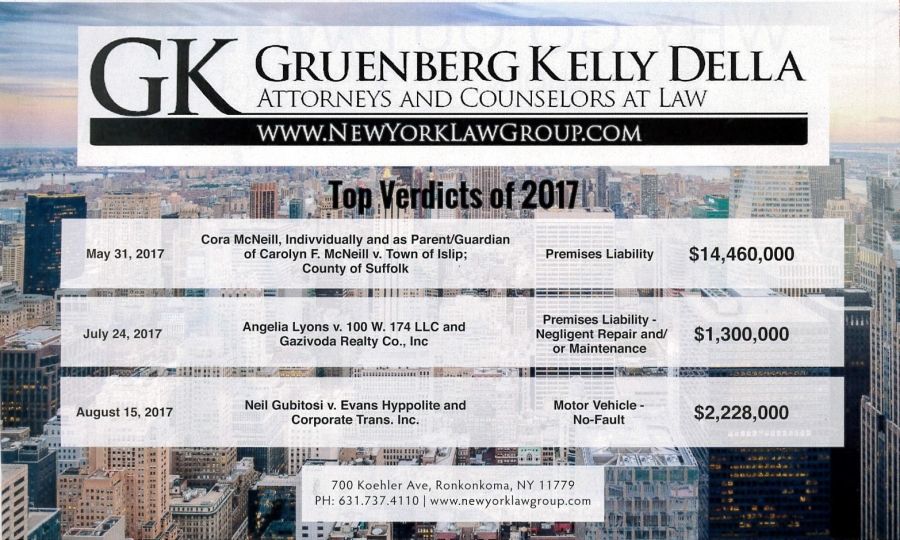 Parties Agreed on a Settlement

Douglas Roth, 46, a graphic designer, was driving westbound on Vanderbilt Parkway, in Half Hollow Hills. As Roth drove by Half Hollow Hills High School, his vehicle was struck on the driver side front fender by the passenger-side corner of a rental vehicle operated by Anikumar Patil, attempting a left turn onto westbound Vanderbilt from
the school’s parking lot. Roth claimed that he sustained injuries of his back, his neck and a wrist.

Roth sued Patil and the owner of Patil’s vehicle, EAN Trust. Roth alleged that Patil was negligent in the operation of her vehicle. He further alleged that EAN Trust was vicariously liable for Patil’s actions.

Roth’s counsel contended that Patil violated New York State Vehicle and Traffic Law § 1142 by failing to yield to oncoming traffic. A school security officer that witnessed the accident claimed that Patil did not stop at the stop sign located at the parking lot’s exit.

Defense counsel contended that Roth failed to see what was there to be seen, and should have avoided the accident.

At about 5:30 p.m. om Oct. 7, 2008, plaintiff Jonessia Jarrell, 51, a retiree and a part-time school security guard, was driving on the westbound service road of Sunrise Highway, just west of Blueberry Lane, in East Patchogue. Jarrell crashed into a 30-yard dumpster connected to a truck that was parked on the westbound service road, extending 3 to 4 feet into the single lane for westbound moving traffic. Three other vehicles had previously crashed into the rear of the truck’s dumpster and were parked in front of the truck at the time of Jarrell’s collision. Jarrell claimed that she sustained injuries of her back, a hand and her neck.

Jarrell sued the truck’s driver, William Milken Jr.; the truck’s owner, InterCounty Paving Associates; and a subsidiary of that company, 4L Equipment Leasing, LLC. Jarrell alleged that Milken was negligent in the operation of his vehicle. Jarrell further alleged that the remaining defendants were vicariously liable for Milken’s actions.

Jarrell’s counsel contended that Milken violated New York State Vehicle and Traffic Law §§ 1201 and 1202, in regard to the illegal parking of his truck on the service road. Jarrell claimed that as she approached Milken’s parked vehicle, with the sun setting in her eyes, she moved to the middle of the one-lane road, but that the truck was parked in her lane of travel, causing the right, front bumper of her car to impact the rear of the dumpster. One of the other drivers that hit the truck claimed that he witnessed the accident, and he corroborated Jarrell’s account.

On Jan. 17, 2003, plaintiff TeresaDoherty, 44, a homemaker, slipped in the gymnasium of Smithtown Middle School, which is located at 100 School Road, in Smithtown. She fell, and she sustained injuries of her back.

Doherty claimed that she slipped on water that had been tracked onto one of the “walk-off”mats that had been placed near the gymnasium’s entrance.

She contended that snow had fallen several days prior to the incident and that light drizzle and/or sleet were falling at the time of the incident, which occurred while the gymnasium was hosting an after-school basketball game.

Doherty’s counsel claimed that the school had not assigned a janitor to patrol the gymnasium, despite the fact that a total of about 300 people had attended the basketball game and another sporting event that the school hosted that day.He contended that the school’s maintenance staff was aware that the mats became saturated by condensation and that they were hazardous. He claimed that 13 janitors were working at the time of the incident, but that none was directed to address the hazard.

The school’s lead janitor acknowledged that he cared more about completing his janitorial assignments than the safety of the school’s visitors, and, in a prior cost-benefit analysis, the school had concluded that it would not have cost anything to reroute a janitor to the gymnasium during after-school events.

Defense counsel contended that Doherty’s fall occurred near a door that could only be used to exit the building; thus, water could not have been tracked in from the outside. She argued that the school’s staff acted reasonably by placing the mats near the doors, but that Doherty negligently failed to notice the slippery condition. She also noted that Doherty’s fall occurred sometime around the beginning of the basketball game, but that Doherty’s husband, who also attended the basketball game, did not report the incident until halftime of the game. Defense counsel further contended that the school’s staff did not have notice of the condition.

On July 18, 2008, plaintiff Conrad Hummer, 71, a retiree, was driving westbound on Pulaski Road, in East Northport. While he was stopped at a red light at the intersection of Third Street, his vehicle was rear-ended by a vehicle operated by Margarita Reyes. Hummer claimed that he sustained an injury of his back.

Hummer sued Reyes. He alleged that Reyes was negligent in the operation of her vehicle.

Hummer contended that Reyes was inattentive while approaching the intersection and failed to slow and stop her vehicle on time. Liability was decided via summary judgment. The matter proceeded to a summary jury trial that addressed damages.

On July 12, 2004, plaintiff GiacominoDigiacomo, 37, a store’s manager, was in the freight elevator at the Rego Park Mall, unloading a delivery when the elevator door came down, striking him in the back. Digiacomo claimed that he sustained injuries of his back.

Plaintiff’s counsel claimed that the warning bell for the freight elevator door was not in compliance with state code because it did not provide sufficient warning time. He also claimed that the safety edge of the door was defective as it did not retract upon striking Digiacomo.He contended that Schindler Elevator did not engage in regular and systematic preventativemaintenance. Digiacomo’s elevator expert explained that freight elevators and their safety featuresmust be examined during a preventative maintenance check. During cross-examination, the defense’s elevator expert agreed.

Defense counsel contended that the elevator’s door was not defective and that, if any defect existed, it was due to vandalism. Three elevator mechanics provided testimony regarding the use of a handheld computer and the procedures for entering data regarding service calls and preventive maintenance and the amount of time required for the completion of each task. However, Digiacomo’s counsel reported that the mechanics provided inconsistent testimony regarding polices and procedures for preventative maintenance and for examining safety features of freight elevators during service calls and preventative maintenance calls. According to Digiacomo’s counsel, themechanics testified that the safety edges are not checked along the entire edge, which is prone to damage, during preventive maintenance checks.

The parties negotiated a pretrial settlement.

The jury found the defendant 100% negligent

Settlement of $1.1 Million. Plaintiff, an installer of air-conditioning, heating, and ventilation systems, was working on a residential

Judge Fins $1,100,000 in Damages. A construction worker sued a home owner when, as he was descending a ladder on the home

Passenger in motor vehicle settles for $700,000

Guy Gruenberg settled the matter for $642,500.00. Plaintiff was walking through a parking lot when she tripped and fell in a pothole

Glenn Auletta settled the matter for $400,000.00. Plaintiff was visiting the school to attend her son’s basketball game when she slipped on wet marble

Passenger in motor vehicle gets $350,000 for injuries

Let us know how we can help you or your business